I’ve been craving for a story that is (a) new adult, (b) an urban fantasy, and (c) has an unapologetic Asian main character (d) written by an Asian author. I love new adult because it explores the perspective of characters who now occupy that weird space of “I should know what I’m doing but I just don’t”. I also love urban fantasy for how it explores magical, supernatural, or paranormal forces living among us and what that experience might be like. And of course, I love Asian stories written by Asian authors because our experiences as what it means to be ‘Asian’ is so diverse and interesting.

You can imagine, then, how excited I was to hear that Jason Tanamor wanted to collaborate with The Quiet Pond for Asian Heritage Month. Because his book, Vampires of Portlandia, sounds so so good and the sort of book that I love reading. The idea of blending diaspora Asian experiences with beings and monsters straight out of Filipino folklore? It sounds like such an amazing time and a delight to read.

I have the pleasure of Jason visiting the Pond today – and as a vampire bat wearing a capiz! Before we have a discussion about his book and his inspirations, allow me to introduce his new book, Vampires of Portlandia.

Vampires of Portlandia by Jason Tanamor

When Marcella Leones relocates her family of aswang vampires from the Philippines to Portland, Oregon, she raises her grandchildren under strict rules so humans will not expose them. Her only wish is to give them a peaceful life, far away from the hunters and the Filipino government that attempted to exterminate them.

Before she dies, she passes on the power to her eldest grandchild, Percival. He vows to uphold the rules set forth by Leones, allowing his family to roam freely without notice. After all, they are aswangs.

However, when the aswang covenant is broken, the murder rate in Portland rises drastically. Who is behind the murders? And who is behind the broken covenant? Along with sensie Penelope Jane, Percival must find the truth.

It’s then they discover that there are other breeds of aswangs—werebeasts, witches, ghouls, and viscera—who have been residing in Portland for years.

How cool is that cover? I love how slick and ‘cool’ it feels, and I feel like it does a fantastic job at setting the mood for what exploring Portland through Percival’s eyes will be like. Also – aswang?! Werebeasts, witches, ghouls, and vampires? Sign me up!

Xiaolong: Hi Jason, and a very warm welcome to The Quiet Pond! Thank you so much for visiting us during Asian Heritage Month! Can you tell us a little bit about yourself?

Jason: I’m currently living in Portland, Oregon with my family (wife, two dogs, and four cats), and working full-time for the U.S. Army Corps of Engineers. In my free time I write novels in and out of various genres. One novel may be horror, another dark comedy. My newest novel is a new adult, urban fantasy called Vampires of Portlandia. 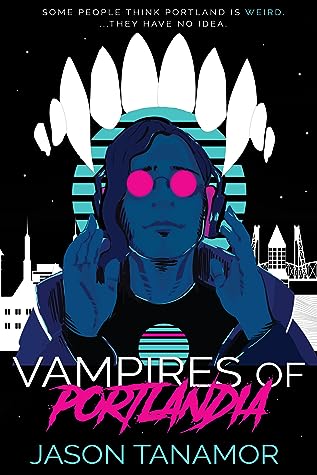 Jason: The novel is based on Filipino folklore—aswangs, which means shape shifter. There are five different breeds of aswangs—vampires, viscera, werebeasts, ghouls, and witches. In the Philippines, aswangs are like the boogieman. It’s a story that elders tell their children and grandchildren to scare them. I’d never heard of it growing up. One day, I was watching the TV show, Grimm, and one of the episodes revolved around aswangs. I’d called my father and he gave me the background, but I don’t think he believed the lore because he was very casual about his response. I slowly became fascinated with the subject.

Jason: One thing about Portland that I’d discovered was the amount of crows that roost in downtown during the Fall season. There are literally thousands of them, camping out on top of buildings and in trees, cawing in unison. It creates an environment—creepy, interesting, fantastical, amazing—that you have to witness for yourself. Since I work downtown, I’d slowly begun to notice them. After a while, I’d started to build the story in my head. It took around seven to nine months to write.

Xiaolong: How did you draw from your personal experiences to write Vampires of Portlandia? What was the writing experience like?

Jason: My personal experience can be found in the siblings and main character, Percival. A lot of the characters’ traits are ones that either I possess (Percival), or other Filipinos that I know possess. The brother, Roger, is sort of like my son. And the young twin, Geena, is like my niece when she was the same age. The rest of the characters are homogenized versions of Filipinos that I know. As a Filipino-American who grew up in the United States, having the novel set in America made it easier to write. The challenge was blending the Philippines world with the Portland world, joining them cohesively while keeping them distinct from one another.

Xiaolong: Tell me a little bit about your experiences of being Filipino-American and ‘re-connecting’ with your Filipino heritage. What were those experiences like?

Jason: I grew up primarily in white people culture. I didn’t see myself as Filipino; I speak very little Tagalog and have never been to the Philippines. Although my parents and grandmother spoke the language, most of my everyday contact was with white friends and teachers. I went to a private school in the eighties, which was mainly white, so I found myself assimilating. I’ve always looked at life through the lens of a non-Filipino. It wasn’t until recently that I’d started to accept my heritage. It was probably due to age or maturity. It could have been pride. It’s weird because when I was around white people I felt very Filipino, but around Filipinos, I felt very white. Now I just don’t care what people think.

There’s an interesting article by Jean Kim, who writes a five-stage model of Asian American identity development [link opens to PDF of her study], that discusses the relationship between Asian-Americans existing in predominantly white culture. It’s very enlightening.

Xiaolong: What is something that you hope readers will take away from your book?

Jason: If you’re one to read too deeply into things, this novel is essentially about a family of Filipinos immigrating to America for a better life. The difference is they’re aswangs, which makes them even more different. It’s wrapped around a story about folklore; but overall it’s about a family that wants to live peacefully, no different than anyone else in the world. My main hope is to just tell an entertaining story and give people an inside look at a culture that is highly underrepresented.

Xiaolong: Last question – and just for fun! – what is a food that reminds you of ‘home’ – wherever that may be?

Jason: Lumpia, which are Spring rolls. There are so many Asian based food carts and restaurants in Portland, many Filipino ones as well, and lumpia is a staple at all of them. The main dishes could deviate, but people can always order lumpia.

Jason Tanamor is the critically acclaimed author of the novels “Anonymous” and “Drama Dolls.” His new novel “Vampires of Portlandia” is a NA urban fantasy about Filipino folklore – aswang.

His writings have appeared in more than 250 publications. He’s interviewed personalities such as Billy Corgan (Smashing Pumpkins), Pete Rose, and Dane Cook, and has covered U.S. President Barack Obama.

Tanamor currently lives and works in the Portland, Oregon area.

What a fun author interview! I want to thank Jason Tanamor once more for visiting the Pond today for Asian Heritage Month and for telling all of us a little bit more about Vampires of Portlandia. Don’t forget to add Vampires of Portlandia on Goodreads – it releases on September 29th later this year, and I’m really looking forward to reading it!

3 thoughts on “Our Friend is Here! Asian Heritage Month Edition – An Interview with Jason Tanamor, Author of Vampires of Portlandia; On Writing Filipino Folklore & Filipino-American Identity”