Evie Thomas doesn’t believe in love anymore. Especially after the strangest thing occurs one otherwise ordinary afternoon: She witnesses a couple kiss and is overcome with a vision of how their romance began . . . and how it will end. After all, even the greatest love stories end with a broken heart, eventually.

As Evie tries to understand why this is happening, she finds herself at La Brea Dance Studio, learning to waltz, fox-trot, and tango with a boy named X. X is everything that Evie is not: adventurous, passionate, daring. His philosophy is to say yes to everything–including entering a ballroom dance competition with a girl he’s only just met.

Falling for X is definitely not what Evie had in mind. If her visions of heartbreak have taught her anything, it’s that no one escapes love unscathed. But as she and X dance around and toward each other, Evie is forced to question all she thought she knew about life and love. In the end, is love worth the risk?

I’m going to be honest here. I was on a time crunch with multiple writing deadlines, and needed to choose a book I could finish quickly, so I turned to a tried and true author whose books I have previously flown through: Nicola Yoon. Her newest release, Instructions for Dancing, seemed like the perfect candidate for all of my requirements, but I did not see the humongous wave of feelings coming that was about to steamroll me within these 300 (or so) pages.

END_OF_DOCUMENT_TOKEN_TO_BE_REPLACED

Seventeen-year-old Julie has her future all planned out—move out of her small town with her boyfriend Sam, attend college in the city, spend a summer in Japan. But then Sam dies. And everything changes.

Heartbroken, Julie skips his funeral, throws out his things, and tries everything to forget him and the tragic way he died. But a message Sam left behind in her yearbook forces back memories. Desperate to hear his voice one more time, Julie calls Sam’s cellphone just to listen to his voicemail.

And Sam picks up the phone.

In a miraculous turn of events, Julie’s been given a second chance at goodbye. The connection is temporary. But hearing Sam’s voice makes her fall for him all over again, and with each call it becomes harder to let him go. However, keeping her otherworldly calls with Sam a secret isn’t easy, especially when Julie witnesses the suffering Sam’s family is going through. Unable to stand by the sidelines and watch their shared loved ones in pain, Julie is torn between spilling the truth about her calls with Sam and risking their connection and losing him forever.

I was provided an uncorrected bound manuscript from the author. My honest opinions in this book review reflect this version and may be different to the final version of the book.

It’s been two months since I finished You’ve Reached Sam, and it’s a book that has stayed with me since. I think about this book almost every other day. You’ve Reached Sam is a story that confronts grief in its most intense and most painful. And yet, though I was a sobbing, snotty mess by the end of the book, its tender and genuine portrayal of love in its most pure form was also unexpectedly healing.

END_OF_DOCUMENT_TOKEN_TO_BE_REPLACED 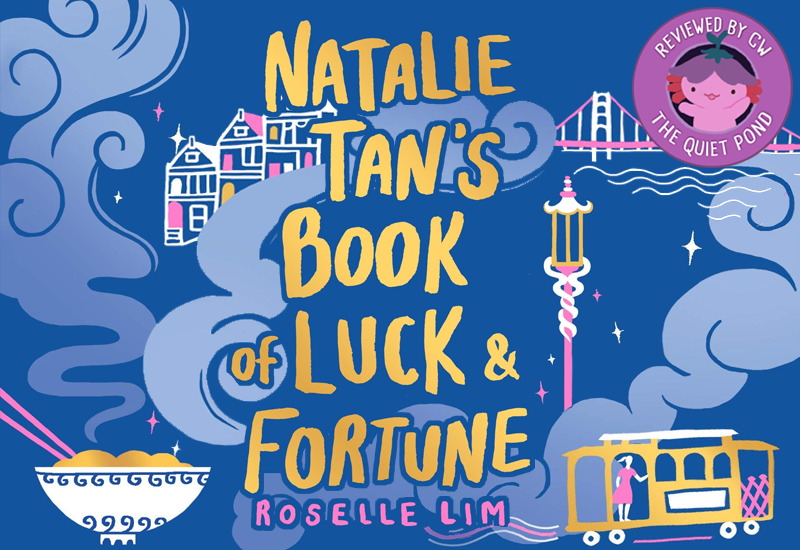 At the news of her mother’s death, Natalie Tan returns home. The two women hadn’t spoken since Natalie left in anger seven years ago, when her mother refused to support her chosen career as a chef. Natalie is shocked to discover the vibrant neighborhood of San Francisco’s Chinatown that she remembers from her childhood is fading, with businesses failing and families moving out. She’s even more surprised to learn she has inherited her grandmother’s restaurant.

The neighborhood seer reads the restaurant’s fortune in the leaves: Natalie must cook three recipes from her grandmother’s cookbook to aid her struggling neighbors before the restaurant will succeed. Unfortunately, Natalie has no desire to help them try to turn things around–she resents the local shopkeepers for leaving her alone to take care of her agoraphobic mother when she was growing up. But with the support of a surprising new friend and a budding romance, Natalie starts to realize that maybe her neighbors really have been there for her all along.

Natalie Tan’s Book of Luck and Fortune seemed like it had the recipe of an instant favourite: A story about a Chinese-American woman who returns home to face her demons, explores and celebrates the importance and power of food, and has themes of family, specifically generations of strong and fierce Chinese woman. To my immense disappointment, Natalie Tan has its heart in the right place but was, unfortunately and ultimately, an incredibly frustrating book to read.

END_OF_DOCUMENT_TOKEN_TO_BE_REPLACED

In a country teetering on the brink of civil war, two young people meet—sensual, fiercely independent Nadia and gentle, restrained Saeed. They embark on a furtive love affair and are soon cloistered in a premature intimacy by the unrest roiling their city. When it explodes, turning familiar streets into a patchwork of checkpoints and bomb blasts, they begin to hear whispers about doors—doors that can whisk people far away, if perilously and for a price. As the violence escalates, Nadia and Saeed decide that they no longer have a choice. Leaving their homeland and their old lives behind, they find a door and step through.

I had heard so much about Exit West; heard about how brilliant it was, how thoughtful, and how deep, and I have to say — I absolutely agree with all its praises. It follows Nadia and Saeed, two characters who live in an unnamed Middle-Eastern country (though the author has alluded that the city is based on his home in Pakistan), and how they escape the violence and instability of their country by escaping through a mysterious door that has appeared across the world. Transported to a new place, Nadia and Saeed grapple with losing their home and trying to make a new one. And thus, Hamid has elegantly written a profound and moving story about emigration, the refugee experience, and the relationships we have with others.